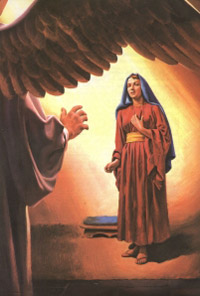 A Marian apparition is an event in which the Blessed Virgin Mary is believed to have supernaturally appeared to one or more persons. They are often given names based on the town in which they were reported, or on the sobriquet which was given to Mary on the occasion of the apparition. Marian apparitions sometimes are reported to recur at the same site over an extended period of time.