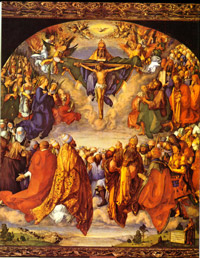 Solemnity celebrated on the first of November. It is instituted to honour all the saints, known and unknown, and, according to Urban IV, to supply any deficiencies in the faithful's celebration of saints' feasts during the year.

In the early days the Christians were accustomed to solemnize the anniversary of a martyr's death for Christ at the place of martyrdom. In the fourth century, neighbouring dioceses began to interchange feasts, to transfer relics, to divide them, and to join in a common feast; as is shown by the invitation of St. Basil of Caesarea (397) to the bishops of the province of Pontus. Frequently groups of martyrs suffered on the same day, which naturally led to a joint commemoration. In the persecution of Diocletian the number of martyrs became so great that a separate day could not be assigned to each. But the Church, feeling that every martyr should be venerated, appointed a common day for all. The first trace of this we find in Antioch on the Sunday after Pentecost. We also find mention of a common day in a sermon of St. Ephrem the Syrian (373), and in the 74th homily of St. John Chrysostom (407). At first only martyrs and St. John the Baptist were honoured by a special day. Other saints were added gradually, and increased in number when a regular process of canonization was established; still, as early as 411 there is in the Chaldean Calendar a "Commemoratio Confessorum" for the Friday after Easter. In the West Boniface IV, 13 May, 609, or 610, consecrated the Pantheon in Rome to the Blessed Virgin and all the martyrs, ordering an anniversary. Gregory III (731-741) consecrated a chapel in the Basilica of St. Peter to all the saints and fixed the anniversary for 1 November. A basilica of the Apostles already existed in Rome, and its dedication was annually remembered on 1 May. Gregory IV (827-844) extended the celebration on 1 November to the entire Church. The vigil seems to have been held as early as the feast itself. The octave was added by Sixtus IV (1471-84).

All Saints Day Definition and Summary

Basic Facts About All Saints Day

The Feast of All Saints is a holy day of the Church honoring all saints, known and unknown. This is much like the American holidays Veterans Day and Presidents Day, where many people are honored on one day. While we have information about many saints, and we honor them on specific days, there are many unknown or unsung saints, who may have been forgotten, or never been specifically honored. On All Saints Day, we celebrate these saints of the Lord, and ask for their prayers and intercessions. The whole concept of All Saints Day is tied in with the concept of the Communion of Saints. This is the belief that all of God's people, on heaven, earth, and in the state of purification (called Purgatory in the West), are connected in a communion. In other words, Catholics believe that the saints of God are just as alive as you and I, and are constantly interceding on our behalf. Remember, our connection with the saints in heaven is one grounded in a tight-knit communion. The saints are not divine, nor omnipresent or omniscient. However, because of our common communion with and through Jesus Christ, our prayers are joined with the heavenly community of Christians. St. Cyril of Jerusalem (AD 350) testifies to this belief:

We mention those who have fallen asleep: first the patriarchs, prophets, apostles, and martyrs, that through their prayers and supplications God would receive our petition...

There are thousands of canonized saints, that is those individuals officially recognized by the Church as holy men and women worthy of imitation. Because miracles have been associated with these people, and their lives have been fully examined and found holy by the Church, we can be assured they are prime examples of holiness, and powerful intercessors before God on our behalf. There are also many patron saints, guardians or protectors of different areas and states of life.

Christians have been honoring their saints and martyrs since the beginning. The Martyrdom of Polycarp, probably written near the middle of the second century, attests to this reality:

Accordingly, we afterwards took up his bones, more precious than the most exquisite jewels, and more pure than gold, and deposited them in a fitting place, so that when being gathered together, as opportunity is allowed us, with joy and rejoicing, the Lord shall grant us to celebrate the anniversary of his martyrdom, both in memory of those who have already finished their course, and for the exercising and preparation of those yet to walk in their steps (18).

Initially the calendars of saints and martyrs varied from location to location, and many times local churches honored local saints. However, gradually feast days became more universal. The first reference to a general feast celebrating all saints occurs in St Ephrem the Syrian (d. AD 373). St. John Chrysostom (d. AD 407) assigned a day to the feast, the first Sunday after Pentecost, where in the Eastern Churches the feast is celebrated to this day. In the West, this date was probably originally used, and then the feast was moved to May 13th. The current observance (November 1) probably originates from the time of Pope Gregory III (d. AD 741), and was likely first observed on November 1st in Germany.

Some Christians visit cemeteries on Halloween, not to practice evil, but to commemorate departed relatives and friends, with picnics and the last flowers of the year. The day after All Saints day is called All Soul's Day, a day to remember and offer prayers up on behalf of all of the faithful departed. In many cultures it seems the two days share many customs.
The Lives of the Saints