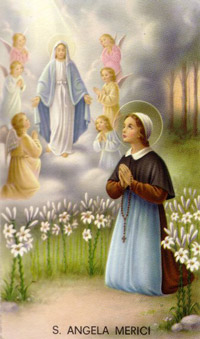 Foundress of the Ursulines, born 21 March, 1474, at Desenzano, a small town on the southwestern shore of Lake Garda in Lombardy; died 27 January, 1540, at Brescia.

She was left an orphan at the age of ten and together with her elder sister came to the home of her uncle at the neighbouring town of Salo where they led an angelic life. When her sister met with a sudden death, without being able to receive the last sacraments, young Angela was much distressed. She became a tertiary of St. Francis and greatly increased her prayers and mortifications for the repose of her sister's soul. In her anguish and pious simplicity she prayed God to reveal to her the condition of her deceased sister. It is said that by a vision she was satisfied her sister was in the company of the saints in heaven.

When she was twenty years old, her uncle died, and she returned to her paternal home at Desenzano. Convinced that the great need of her times was a better instruction of young girls in the rudiments of the Christian religion, she converted her home into a school where at stated intervals she daily gathered all the little girls of Desenzano and taught them the elements of Christianity. It is related that one day, while in an ecstasy, she had a vision in which it was revealed to her that she was to found an association of virgins who were to devote their lives to the religious training of young girls. The school she had established at Desenzano soon bore abundant fruit, and she was invited to the neighbouring city, Brescia, to establish a similar school at that place. Angela gladly accepted the invitation.

In 1524, while making a pilgrimage to the Holy Land, she became suddenly blind when she was on the island of Crete, but continued her journey to the Holy Places and was cured on her return while praying before a crucifix at the same place where she was struck with blindness a few weeks before. When, in the jubilee year 1525, she had come to Rome to gain the indulgences, Pope Clement VII, who had heard of her great holiness and her extraordinary success as a religious teacher of young girls, invited her to remain in Rome; but Angela, who shunned publicity, returned to Brescia. Finally, on the 25th of November, 1535, Angela chose twelve virgins and laid the foundation of the order of the Ursulines in a small house near the Church of St. Afra in Brescia. Having been five years superior of the newly-founded order, she died.

Her body lies buried in the Church of St. Afra at Brescia. She was beatified in 1768, by Clement XIII, and canonized in 1807, by Pius VII. Her feast is celebrated 31 May.
The Lives of the Saints