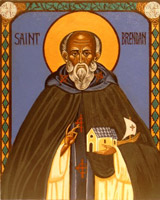 Saint Brendan, (484 (?) - 577 (?)) called the "Navigator," is one of the early Irish monastic saints whose legends have overshadowed their history. He was born in Ciarraight Luachra, near Tralee in County Kerry, Ireland, in 484 CE; he died at Enachduin, (now Annaghdown), in 577, aged 93. He was baptized at Tubrid, near Ardfert, by Bishop Erc. For five years he was educated under Saint Ita, "the Brigid of Munster", and he completed his studies under Erc, who ordained him priest in 512. Between the years 512 and 530 St. Brendan built monastic cells at Ardfert, and at Shanakeel or Baalynevinoorach, at the foot of Brandon Hill. It was from here that he set out on his famous seven years voyage for the Land of Delight. The old Irish Calendars assigned a special feast for the Egressio familiae S. Brendani, on 22 March; and St Aengus the Culdee, in his Litany composed at the close of the eighth century, invokes "the sixty who accompanied St. Brendan in his quest for the Land of Promise".

St Brendan is chiefly renowned for the semi-legendary Voyage of St Brendan, in which he is said to have set out onto the Atlantic Ocean with sixty pilgrims, searching for the Garden of Eden. If it happened, this would have occurred in around 530, before his travel to the island of Britain. On his trip, Brendan is supposed to have seen a blessed island covered with vegetation; convinced that he had seen Paradise, he returned to Ireland. He also encountered a sea monster, an adventure he shared with his contemporary St Columba. It is possible that Brendan may have encountered the Shetland Islands on his journey, perhaps being their first historical coloniser, as the Orkney Islands were recolonised by Christian missionaries about this time. The Orkneys had been heard of and commonly known to the monks but Shetlands were not, representing the next step outwards from the British Isles. Christopher Columbus may have relied on the legends told of St Brendan as part of his argument that it was indeed possible to travel to Asia by crossing the Atlantic. Some propose St Brendan as one of the ancient visitors to the Americas.

Naturally, the story of the seven years voyage was carried about, and soon crowds of pilgrims and students flocked to Ardfert. Thus, in a few years, many religious houses were formed-- at Gallerus, Kilmalchedor, Brandon Hill, and the Blasquet Islands-- in order to meet the wants of those who came for spiritual guidance to St. Brendan.

Later, he travelled in the British Isles and visited Wales and the holy island of Iona; returning to Ireland, he founded a bishopric at Annaghdown, where he spent the rest of his days. He was recognised as a saint by the Irish church, and his feast day is May 16. Having established the bishopric of Ardfert, Brendan proceeded to Thomond, and founded a monastery at Inis-da-druim (now Coney Island), in the present parish of Killadysert, County Clare, about the year 550. He then journeyed to Wales, and thence to Iona, for his is said to have left traces of his apostolic zeal at Kil-brandon ' (near Oban) and Kil-brennan Sound. After a three years' mission in Britain he returned to Ireland, and did more proselytizing in various parts of Leinster, especially at Dysart (Co. Kilkenny), Killiney (Tubberboe), and Brandon Hill. He founded the bishopric of Annaghdown and established churches at Inchiquin, County Galway, and at Inishglora, County Mayo.

His most celebrated foundation was Clonfert, in 557, over which he appointed St. Moinenn as Prior and Head Master. Brendan was interred in Clonfert, and his feast is kept on 16 May.
The Lives of the Saints