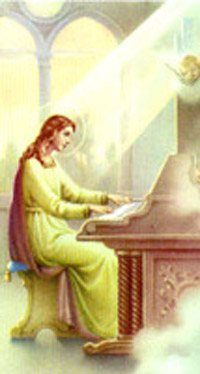 St. Cecilia, virgin and martyr, and frst of her name

Cecilia is as much to say as the lily of heaven, or a way to blind men. Or she is said of celo and lie, or else cecilia, as lacking blindness. Or she is said of celo, that is heaven, and legs, that is people. She was a heavenly lily by cleanness of virginity, a way to blind men by information of example, heaven by devout contemplation, lia by busy operation, lacking blindness by shining of wisdom, and heaven of the people. For the people beheld in her as in following the spiritual heaven, the sun, the moon, and the stars, that is to say, shining of wisdom, magnanimity of faith, and diversity of virtues. Or she is said a lily, for she had the whiteness of cleanness, a good conscience, and odour of good fame. Or she is said heaven, for Isidore saith that the philosophers say that heaven is movable, round, and burning. In like wise was she moving by busy operation, round by perseverance, and burning by fiery charity.

S. Cecilia, the holy virgin, was come of the noble lineage of the Romans, and from the time that she lay in her cradle she was fostered and nourished in the faith of Christ, and always bare in her breast the gospel hid, and never ceased day ne night from holy prayers, but recommended to God always her virginity. And when this blessed virgin should be espoused to a young man named Valerian, and the day of the wedding was come, she was clad in royal clothes of gold, but under she ware the hair. And she hearing the organs making melody, she sang in her heart, only to God, saying: O Lord, I beseech thee that mine heart and body may be undefouled so that I be not confounded. And every second and third day she fasted, commending herself unto our Lord whom she dreaded. The night came that she should go to bed with her husband as the custom is, and when they were both in their chamber alone, she said to him in this manner: O, my best beloved and sweet husband, I have a counsel to tell thee, if so be that thou wilt keep it secret and swear that ye shall bewray it to no man. To whom Valerian said that he would gladly promise and swear never to bewray it, and then she said to him: I have an angel that loveth me, which ever keepeth my body whether I sleep or wake, and if he may find that ye touch my body by villainy, or foul and polluted love, certainly he shall anon slay you, and so should ye lose the flower of your youth. And if so be that thou love me in holy love and cleanness, he shall love thee as he loveth me and shall show to thee his grace. Then Valerian, corrected by the will of God, having dread, said to her: If thou wilt that I believe that thou sayest to me, show to me that angel that thou speakest of, and if I find veritable that he be the angel of God, I shall do that thou sayest, and if so be that thou love another man than me, I shall slay both him and thee with my sword. Cecilia answered to him: If thou wilt believe and baptize thee, thou shalt well now see him. Go then forth to Via Appia, which is three miles out of this town, and there thou shalt find Pope Urban with poor folks, and tell him these words that I have said, and when he hath purged you from sin by baptism, then when ye come again ye shall see the angel. And forth went Valerian and found this holy man Urban Iouting among the burials; to whom he reported the words that Cecilia had said, and S. Urban for joy gan hold up his hands and let the tears fall out of his eyes, and said: O Almighty God Jesu Christ, sower of chaste counsel and keeper of us all, receive the fruit of the seed that thou hast sown in Cecilia, for, like a busy bee she serveth thee; for the spouse whom she hath taken which was like a wood lion, she hath sent hither like as a meek lamb. And with that word appeared suddenly an old man clad in white clothes, holding a book written with letters of gold, whom Valerian seeing, for fear fell down to the ground as he had been dead. Whom the old man raised and took up, and read in this wise. One God, one faith, one baptism, one God and father of all, above all, and in us all, everywhere. And when this old man had read this, he said: Believest thou this or doubtest thou it? Say yea or nay. Then Valerian cried saying: There is nothing truer under heaven. Then vanished this old man away. Then Valerian received baptism of S. Urban and returned home to S. Cecilia, whom he found within her chamber speaking with an angel. And this angel had two crowns of roses and lilies which he held in his hands, of which he gave one to Cecilia, and that other to Valerian, saying: Keep ye these crowns with an undefouled and clean body, for I have brought them to you from Paradise, and they shall never fade, ne wither, ne lose their savour, ne they may not be seen but of them to whom chastity pleaseth. And thou Valerian because thou hast used profitable counsel, demand what thou wilt.