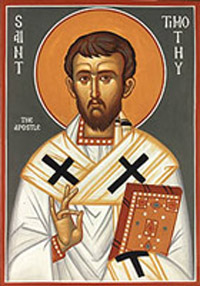 Born at Lystra, Lycaenia, Timothy was the son of a Greek father and Eunice, a converted Jewess. He joined St. Paul when Paul preached at Lystra replacing Barnabas, and became Paul's close friend and confidant. Paul allowed him to be circumcised to placate the Jews, since he was the son of a Jewess, and he then accompanied Paul on his second missionary journey. When Paul was forced to flee Berea because of the enmity of the Jews there, Timothy remained, but after a time was sent to Thessalonica to report on the condition of the Christians there and to encourage them under persecution, a report that led to Paul's first letter to the Thessalonians when he joined Timothy at Corinth. Timothy and Erastus were sent to Macedonia in 58, went to Corinth to remind the Corinthians of Paul's teaching, and then accompanied Paul into Macedonia and Achaia. Timothy was probably with Paul when the Apostle was imprisoned at Caesarea and then Rome, and was himself imprisoned but then freed. According to tradition, he went to Ephesus, became its first bishop, and was stoned to death there when he opposed the pagan festival of Katagogian in honor of Diana. Paul wrote two letters to Timothy, one written about 65 from Macedonia and the second from Rome while he was in prison awaiting execution. His feast day is January 26.

St. Timothy's miracle and Martyrdom, and interpretation of his name.

Timothy is as much to say as holding dread. Or of timor, that is dread, and theos, a word of Greek, which is deus in Latin and God in English, as the dread of God.

S. Timothy was taken under Nero of the provost of Rome, and was grievously beaten, and had quicklime put in his throat and upon his wounds. And he rendered thankings to God with all his heart. And then two angels came to him, saying: Lift up thine head to heaven. And then he beheld and saw the heaven open, and Jesu Christ, which held a double crown, and said tn him. Thou shalt receive this of my hand. Anda man named Apollinarius saw this thing and did him to be baptized. And therefore the provost commanded that they twain together, persevering in the confession of our Lord, should be beheaded about the year of our Lord fifty-six.

Dear Saint, well known for your gentleness, you were a most faithful disciple of St. Paul and like him traveled much to bring the Good News to all people. The Letters Paul wrote to you reveal your zeal and inspire us with confidence in you. You too were cast into prison and you too gave your life for Christ. So with confidence we dare to ask: please obtain relief for N. if it be God's will. Amen.

Lord God, You filled St. Timothy with apostolic virtues. Through his intercession may we live good and religious lives here on earth and thus be worthy of our heavenly home. Amen.
The Lives of the Saints