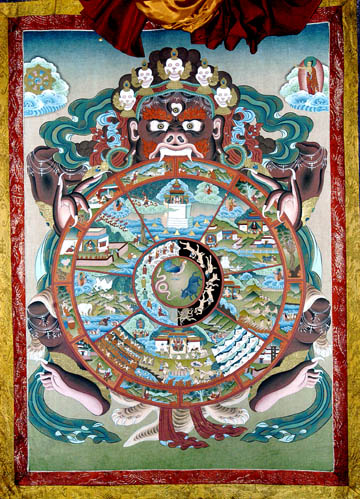 The Sanskrit word samsara means "journeying." In Buddhism, as well as in Hinduism and Jainism, samsara is defined as a cycle of birth, death, and rebirth. Samsara is sometimes thought of as a circumstance or an illusion. In Buddhism it is also thought of as the process by which karma causes rebirth. Samsara is sometimes depicted as the opposite of Nirvana. However, the Mahayana school of Buddhism views both Nirvana and Samsara as mental representations. To one who appreciates the true nature of the world, Nirvana and Samsara are not different from one another.

Samsāra refers to the state of perpetual reincarnation or rebirth, in which all beings are ensnared, according to the Indian religions of Hinduism, Buddhism, and Jainism. Etymologically, samsāra is derived from Sanskrit and Pāli, meaning "continuous movement," "continuous flowing" or "wandering." The term is also generally applied to conditioned, transient existence within the material world, which is in juxtaposed with notions of liberated states such as moksha and nirvana.

Although understandings of samsāra vary between the Indian philosophical traditions as well as within their sects, certain points are consistently acknowledged. Indic religions typically assert that rebirth is an ongoing and beginningless cycle as well as an observable principle of nature. This cycle is inextricably linked with the doctrine of karma, which states that human action has consequences not only in this life, but in future lives as well. Karma is said to determine the nature of one's rebirth in the samsaric world. Most of these traditions regard samsāra negatively, as a fallen condition marked by suffering, sorrow and impermanence. Actions motivated by desire, selfish individualism or ignorance of the true nature of the self and reality lead to rebirths. According to the merit of their karma, an individual may be reincarnated as another human, animal, or even as an insect or plant. One may also be reborn in a particular locale, such as heaven or hell. The ultimate goal of all three religions is to escape from samsāra. However, in all three religions, some lay practitioners engage in so-called "samsaric" forms of religiosity, which refers to the performance of good works in order to improve karma and thereby gain a more favorable birth in the next life.

As the real self (atman) remains unchanged throughout life, it likewise continues after death. This soul is carried within the subtle (astral) body to its next destination. The precise nature of the new body is determined by the state of mind at death and is specifically influenced by (1) the person's desires, and (2) his karma.

Samsara refers to the process of passing from one body to another throughout all species of life. Hindus believe that consciousness is present in all life forms, even fish and plants. However, though the soul is present in all species, its potential is exhibited to different degrees. In aquatics and plants it is most "covered", practically asleep, whereas in humans it is most alert. This progression of consciousness is manifest throughout six broad "classes of life, "namely (1) aquatics, (2) plants, (3) reptiles and insects, (4) birds, (5) animals and (6) humans, including the residents of heaven. Most Hindus consider samsara essentially painful, a cycle of four recurring problems: birth, disease, old-age, and death.

The Bible and Reincarnation

Can Demons Cause Momeries of Past Lives?