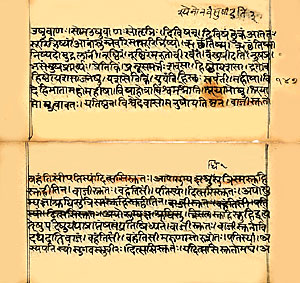 Upanishad is formed from three words meaning "near" "down" and "sit" and refers to the act of students sitting close to a teacher who is imparting some important or secret doctrine. The Upanishads are one part of Hindu scriptures, describing reincarnation. Some centuries before the time of Krishna and Buddha the Upanishads were a dominant teaching.

What are the Upanishads?

The Upanishads are ancient, sacred texts that form the final part of Hindu religious thought. The Sanskrit word Upanishad literally means to sit at the feet of a master to receive some important or secret doctrine. The Upanishads are chronologically the latest portions of the Vedas, the sacred texts of Hinduism. The sage Yajnavalkya is said to be the primary teacher of the Upanishads, which are written in Sanskrit. It is believed that later Hindu and Buddhist philosophy is founded on Upanishad teachings. Of the approximately 108 existing Upanishads, twelve are considered to be the core teachings.

The earliest Upanishads, probably dating from 900 to 600 BC, represent the first development of philosophical reflections in Sanskrit literature; later works have also been accepted from time to time as Upanishads. According to a widespread tradition the oldest Upanishads are the Isa, Kena, Katha, Prasna, Mundaka, Mandukya, Taittiriya, Aitareya, Chandogya, Brhadaranyaka, Svetasvatara, Kaushitaki, and Maitri Upanishads. The material they comprise is part poetry, part prose. They contain didactic stories, allegories, and passages for meditation, a number of which are repeated in more than one Upanishad or elsewhere in the Vedic corpus.

The Upanishads take the form of dialogues, with each discoursing on a metaphysical, moral or teleological theme. In brief, the thought in the Upanishads is concerned with the Brahman (universal soul) and the Atman (individual soul) and the relationship between the two. The Brahman is the all encompassing plane of being that acts as the informing principle of all other existence. Because they are the final portions of the Vedas, they are also known as Vedanta, "the end of the Vedas," and their thought, as interpreted in succeeding centuries, is likewise known as Vedanta.

The core spiritual vision of the Upanishads is a philosophical argument that says only through a devoted personal effort can one find truth. Vedic doctrines such as self-realization, yoga and meditation, karma and reincarnation veiled in mystery in older religion but the Upanishads reveal much of this mystery by affixing a particular Veda through a Brahmana or Aranyaka. The Upanishads espouse neti-neti, a view that truth can be found only through the negation of all thoughts around truth.

As with any religious text, exegeses of the Upanishads are many and are informed by differing metaphysical and religious beliefs; the principal commentaries, however, are to be found in the writings of Shankara, Madhvacharva and Vishishtadvaita. The most salient differences between these various schools is to be discerned in how they regard the metaphysical status of Brahman. Shankara and Madvacharva differ most obviously in this regard, for the former postulates that Brahman is limitless and beyond temporal notions of being, while the latter positions Brahman in the pantheon along with gods such as Vishnu and Krishna.

The Upanishads record the thoughts and philosophical musings of a succession of Hindu teachers and sages who worked around 1000 BC, but who were particularly prominent in 600 BC. It has been speculated that the Upanishads from the earlier period form part of Brahmanas (commentaries) of their respective Vedas, yet they are to be distinguished from them because the bias of their enquiry is more philosophical and mystical and conversely they pay less attention to the so called deities of the Vedas and their associated sacrificial rites.

The influence of the Upanishads isn't limited to Hinduism. They are known to have been studied by Jains and Buddhists. Equally, during the Middle Ages, Muslim scholars such as Dara Shikoh, the elder son of Shajahan, were influenced by Hindu philosophy and the Upanishads in particular. He had a number of the Upanishads translated into his native Persian. However, it was with the establishment of the British Raj in India and the well regarded translations made by German Philologist Max Muller that the Upanishads met with a large European audience.

The main philosophy of the Upanishads can be put into 3 main principles:

The philosophy of Upanishad presented some polytheistic conceptions. The Upanishads subordinated the concept of many gods, to the One. Upanishad is the doctrine for right living. It aims to liberate the spirit from the restrains of the flesh that it might enjoy communion with God. A compromise between the philosophic faith of the few and the superstition of the crowds was thus neatly reconciled in the philosophy and mysticism of the Upanishad.

The Upanishads, originating as commentaries on the Vedas between about 800 and 200 B.C., contain speculations on the meaning of existence that have greatly influenced Indian religious traditions. Most important is the concept of atman (the human soul), which is an individual manifestation of brahman. Atman is of the same nature as brahman, characterized either as an impersonal force or as God, and has as its goal the recognition of identity with brahman. This fusion is not possible, however, as long as the individual remains bound to the world of the flesh and desires. In fact, the deathless atman that is so bound will not join with brahman after the death of the body but will experience continuous rebirth. This fundamental concept of the transmigration of atman, or reincarnation after death, lies at the heart of the religions emerging from India.

The concept of reincarnation first appeared in the early Hindu scriptures (Upanishads). The ultimate objective of all reincarnation is to fuse with "ultimate reality," to merge with brahman (god), to become brahman (god). All reincarnation teachings are based on a monistic, mystical - occult world view that promotes the essential divinity of humanity, denies the notion of a sovereign personal God, and offers the promise of esoteric wisdom.

Biblical Christianity, in contrast to reincarnational teaching, emphasize grace, atonement, and forgiveness for fallen humanity through the once - for - all death and resurrection of Jesus Christ. The Christian's disavowal of reincarnation is anchored in the biblical assertion that "man is destined to die once, and after that to face judgment" (Heb. 9:27).